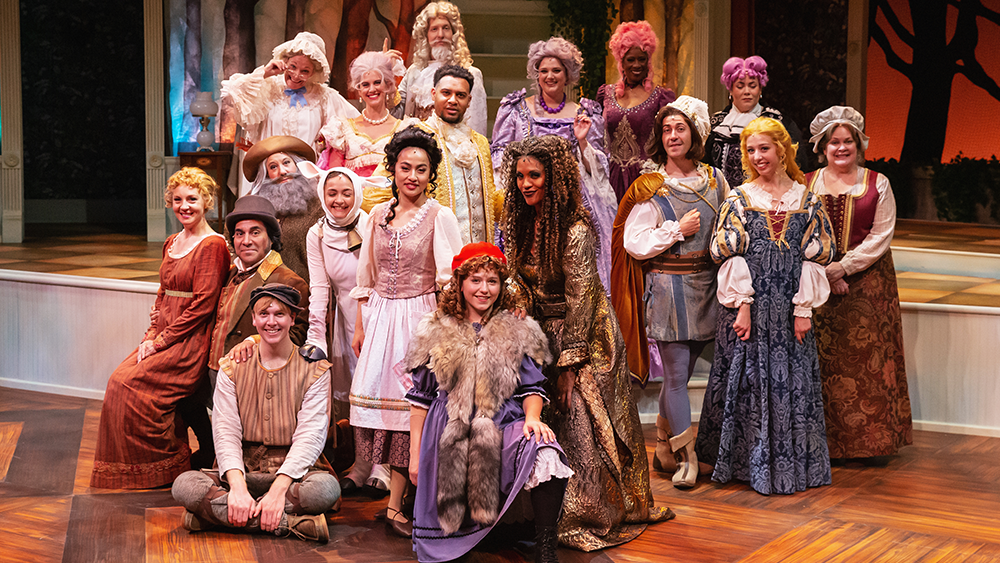 One shared passion I have with my granddaughter, Reneya, is a love of Musical Theater. I’m so excited that she not only loves being in the audience, but she’s a very talented performer! I can’t wait to see her future performances!

In the mean time, it’s fun to be able to share being in the audience at a professional theater production! For her 11th birthday last month, I gave her tickets to see “Into the Woods” at the Arvada center for the Arts.

I got two tickets for the very front row. Front row seats are not desirable in a movie theater, so I was a little nervous about whether or not it would be hard for us to see being so close up. As it turned out, it was amazing to be so close up that at times, it almost seemed that the actors were talking right to us!

“She’s really crying!” Reneya whispered to me, when we could literally see the tears in Cinderella’s eyes. “She’s a really good actress!” As a budding actress, herself, Reneya notices these things.

I loved being close enough to take in all the intricate details of the stage setting and the glimmering costumes. We love the special effects and the creativity that’s involved in getting just the right props, costumes, lighting, and music to set the scenes of the story.

Usually, when I’m going to a professional production at a big theater, I’m so far in the back, I can hardly see anything without binoculars. What a treat to be up front!

“Into the Woods” was also the perfect musical for us because both Reneya and I really like stories that use classic fairy tale characters as back story. She introduced me to the Descendants movies and The Land of Stories book series.

<Spoiler Alert> If you haven’t seen “Into the Woods” and don’t want any spoilers, skip to the <End Spoiler Alert>

Neither of us had seen “Into the Woods” and when the first act ended, all the conflicts were wrapped up so neatly that we both thought the play was over! However, the second act surprised us with it’s unpredictable plot lines! It was a definite deviation from traditional fairy tale, giving it some unexpected depth (and unexpected death.)

Though darker than Disney, we’re reminded that anything can happen in story.. villains might be heroes, what we assume is good, might be bad. And even though it’s not Disney, the dead can come back to life and take part in the happy ending finale, so still appropriate for children. I’d give it a PG rating or maybe even PG13 – not because it’s inappropriate for children, but because of the mature ideas and thinking the second act requires.

The lyrics, by Stephen Sondheim, were incredible in their complexity and substance! As musicals often are, most of the script was in song, but many of these songs had thought-provoking lyrics.

An example is from the second act, Your Fault / The Last Midnight, where the characters are blaming one another for their current predicament, and the Evil Witch reminds them that good or bad, action must be taken.

Coincidentally, the Musical Theater group that I performed with last summer is having a Stephen Sondheim performance this coming up Sunday, so it’s great that I was exposed to more of his music. My good friend, Becky, suggested reading the Sondheim Wikipedia page, and I see his musical genius is more than I’d realized! There are a lot of musicals I’ll be putting on my list to watch!