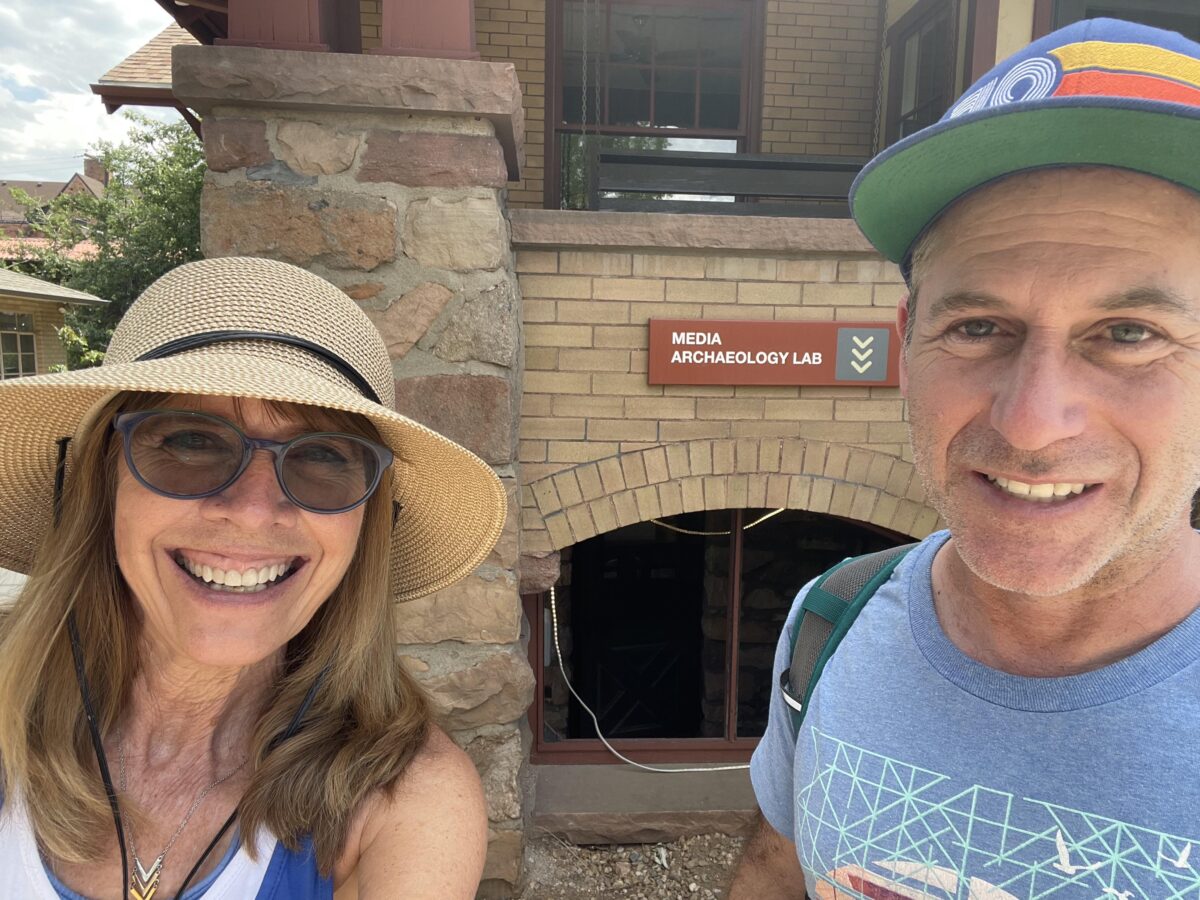 When I saw that Seth (who I’d met in Mexico City) was in Boulder, I thought it would be a perfect opportunity for another Microadventure!

Being the Boulder-area expert that I am, I suggested about 43 different activities ranging from hiking, to tubing, to karaoke. (I won’t include the full summer schedule spreadsheet, but believe me, I was impressive.)

Seth was appropriately awed by my vast knowledge of Boulder events and places.

I also informed Seth that it was Embrace Your Geekness Day since it’s always a bonus to stick with a theme when planning a Microadventure.

Seth downplayed his geekiness: “The extent of my geekiness would be talking about agile!” he humbly claimed. (Actually, anyone who can talk about Agile at all scores major geek-points in my book. I know, I know… not everyone (including Seth) is looking to score geek-points.)

He said he was curious about The Rye Society, a Jewish Deli in the Avanti building on Pearl Street.

We agreed to meet up for lunch there, hang out on Pearl Street, and see what the day would bring. Since I fancy myself an event-planner and ultimate geek, I felt confident we’d find just the right microadventures for the day.

I normally skip lunch, but, of course, wanted to sample some of the Rye Society’s fare. I had a bit of the sandwich and it was OK. (Not worth the $16 price in my opinion, but what do I know about Jewish Deli?)

However, the highlight of the meal for me was trying Dr. Brown’s Cel-Ray soda. I’d never heard of this soda, made with celery! I was expecting something odd-tasting, but it tasted very sweet like ginger-ale or cream soda. I’m even less of a soda-drinker than a Jewish-Deli-eater, and my taste-buds thoroughly enjoyed the novel opportunity of sampling this unusual soda.

I asked Seth to dribble some food to play along with geek day, but he didn’t want to be so stereotypical. I mean, what next? Toilet paper out the back of the pants?

Then he said he knew a very geeky place we could go: The Media Archaeology Lab!

Dubbed “The Computer Lab of your Dreams” this was the Mama of all Geek Museums! Epic! And it was less than a mile away and open!

I can’t believe Seth found the most perfect Microadventure and the absolute geekiest museum when he doesn’t even live here and didn’t even know it was Embrace Your Geekness Day! It’s like he has some sort of Microadventure Superpowers!

Even though Seth and I share a common lack of sense of direction, we navigated to MAL using Google maps. It almost looked like a residential property as we approached it from behind, so we weren’t sure we were in the right place, but as we rounded the building, we were pleased to see we’d found the right place.

It was not a typical museum, but more like a basement filled with old computers, working software (dating back to floppy disks) and devices (Remember Palm Pilots?), phonographs, typewriters, adding-machines, cameras, printing presses, gaming systems… all kinds of gadgets!

There were so many games and devices that brought back memories of my computer-obsessed life. I have always LOVED computers and technology! (Playing a little Zork makes me appreciate how far the gaming technology has progressed!)

Stopping at BMoCA was a bonus microadventure and a bit anticlimactic after the Wow factor of being in computer-heaven. (We actually just stopped here while we were waiting for our table at the Dushanbe Teahouse.)

Though the pieces were thought-provoking, contemporary art is something I’ve never quite understood.

For example, the art piece pictured just looks like a weirdly-colored, huge mess to me. This looks way messier than Scotty’s room ever was at its worst! At least Scotty didn’t have pool noodles haphazardly sticking out helter-skelter! And this was my favorite piece in the museum! At least it was whimsical!

There were other art pieces that looked like body parts..primarily intestines. Kind of freaky. Stuff of nightmares.

But it’s good to be exposed to everything. I think it’s fairly typical for geeks not to fully appreciate art, and the museum was free today, so Yay for new experiences. (Please, God, no body part nightmares tonight.)

Our final stop on this fun-filled day was the iconic Dushanbe Teahouse. I have to admit, since I’ve been here quite often, I didn’t take photos of the impressive decor, but I absolutely recommend it as a must-see stop for Boulder visitors.

Once again, Seth, despite being the out-of-towner, rattled off his knowledge of the history of the teahouse. (It’s like Seth’s brain is wikipedia! I don’t care if he does think he’s cool, he’s a geek of major proportions!) I, on the other hand, can’t even seem to remember how to pronounce “Dushanbe.” But, for those who don’t have access to Seth’s encyclopedia-like brain, here’s a blurb about the history from their Website:

In 1987, during his first visit to Boulder, Mayor Maksud Ikramov announced that Dushanbe planned to present our city with a Teahouse to celebrate the establishment of sister city ties. From 1987 -1990, more than 40 artisans in several cities of Tajikistan created the decorative elements our Teahouse, including its hand-carved and hand-painted ceiling, tables, stools, columns, and exterior ceramic panels. Often these skills are handed down from generation to generation within families. Lado Shanidze served as chief architect.

I tried a dish I’d never had before, the Swiss Raclette Fondue – very delicious! I like the name (Raclette rhymes with Yvette, after all) filled with ham, apples, and cucumber pickles.

So there you have it! A whirlwind Boulder-Area Geek-Filled set of Microadventures on this Wednesday afternoon in July! Despite my “Boulder expertise,” Seth introduced me to MAL – a place that I didn’t even know existed! I tried a new drink, new cheese, and viewed new weird art! And, as always, the real treat was being able to experience it all with someone else. Seth is definitely a unique character and was the perfect companion for Embrace Your Geekness Day!