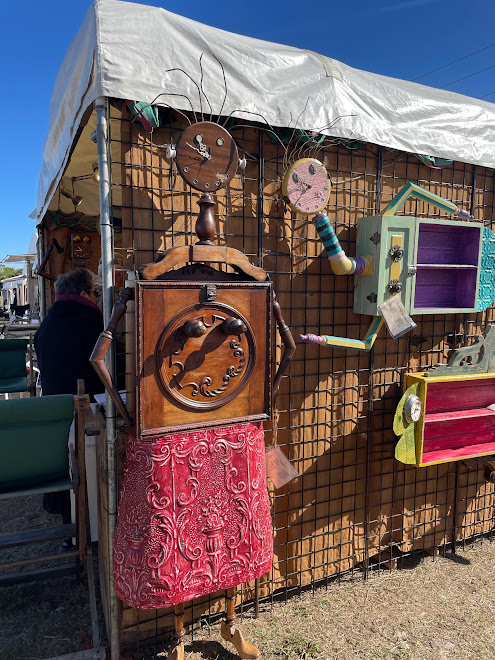 Today’s microadventure was fun both for the event and the company, which, of course, is always the goal. However, since it was the first time I’d met Madeline, and the only thing I knew about her is that we had a mutual Facebook friend, I wasn’t quite sure how she’d like being my microadventure-buddy. I’m happy to say she very happily agreed to not only joining me for the event, but enduring my photos and questions with good humor and interest!

Actually, when she told me she’d recently bought a Winnebago and was traveling only with her dog, I was in major awe of her bold spirit! I just love her sense of adventure and felt bonded with her immediately!

Madeline has a love of art and had suggested that we meet at the Sarasota Open Fine Art Show, a Hotworks event.

There were so many beautiful and unique works of art. Every time I go to one of these events, I’m so tempted to buy something special for myself. Maybe it’s a good thing that there are just too many special things that it’s hard for me to pick out just one! There’s also the fact that I don’t even own a place out here (yet). However, when I’m settled in my Bradenton condo (April!) it will be fun to find some special art pieces to decorate the place and make it feel like mine.

After perusing to our heart’s content, Madeline and I took a walk around Phillippi Estates (where the event was held).

Then we grabbed some lunch at this Cousins Maine Lobster Food Truck! (Michael B., I just sampled the goods here with lobster bisque, but waiting to really pig out (or would that be Lobster Out?) with you!)

It was a little chilly outside, so Madeline invited me to her Winnebago to enjoy our soup and talk. Her van was so pretty and clean and new with lots of coziness to accommodate both her and her dog.

She shared a beautiful purplicious quilt that she made with the help of a friend. She had never made a quilt before, but her experienced friend taught her how and now she has her own special work of art for the ultimate in coziness.

A colorful and vibrant day with a colorful, vibrant new friend!

As usual, I’ve had so many wonderful microadventures, that it’s difficult for me to choose one to blog about.

I’ve been meaning to check out the Farmers Market in downtown Sarasota for some time now and last Saturday was the day! I texted, Bill, someone I’d met when I first got to Sarasota, to ask if he’d want to join me, and he gave me the thumbs up!

The Farmers Market had a variety of booths with plenty of produce, food vendors, art booths, and knick-knacks of every sort. It was a party-like atmosphere with music and colorful displays. The sun was out and being the frequent “observer of happiness” that I am, I could just feel the positive energy all around me. I thought about what a contrast my life is to what’s happening in Ukraine right now. I felt both gratitude for my life and sadness for what’s going on there. Not wanting to take any of it for granted, I savored the sights, sounds, and smells on this lovely day.

I found a bunch of yummy fruits and vegetables as soon as we arrived and filled up my bag. I saw a crepe place (one of my favorite foods!) but I’d already eaten AND I’m trying to eat healthy again in March. (I ate very healthfully in January. February? Not so much.). Maybe I’ll come back for a crepe in April!

Bill, who knows a good food when he sees it, regardless of the month, stopped to buy a kettle cornball. He just went traditional, rather than trying one of the flavors of the week.. Dill Pickle or Black Truffle Sea Salt. Yeah, that sounds pretty “cornball” to me!

After we’d walked the full length of the Farmers Market, we stopped at Mattison’s City Grille for a drink and to talk. It’s quickly becoming one of my favorite places in downtown Sarasota! Mostly because there’s almost always music playing! Bill and I had been there earlier in the week for dancing and I loved it! There were such a variety of songs that ranged from oldies to rap and everything in between!

I was going to expand this post to include other cafes and restaurants in downtown Sarasota. The streets are filled with quaint coffee shops and unique restaurants. I’m really enjoying exploring!

But those stories and photos will have to wait for another blog post.. another microadventure!

Enjoyed the day seeing Our Town at Sarsota’s Asolorep Theater, followed by a meal at Wicked Cantina and a sunset walk on Lido Beach.

Today’s microadventure starts at the beautiful Asolorep Theater for a performance of Thornton Wilder’s Pulitzer Prize winning play: Our Town.

Becky volunteers at this theater as an usher and she made me aware of this performance which was outstanding on many levels. First of all, Becky’s family actually personally knew Thornton Wilder! Her father and Thornton Wilder roomed together and were friendly enough that she remembers him as “Uncle Thorny!”

Outside of this being a rather prickly-sounding nickname, I think it’s very endearing to imagine Becky, as a child, calling such an esteemed writer, “Uncle Thorny!” I’m almost tempted to suggest an update to his Personal Life of his Wikipedia page with this inside knowledge!

The next unexpected surprise was that the underlying message of the play was the importance of savoring life’s everyday joys — the very same message that I’m promoting with Carpe Diem Day! So often, it’s not until after we lose something (or someone) do we realize how much we took it (them) for granted.

It’s for that very reason that I love having the time to give my full attention to these microadventures each week. I love savoring the experience and capturing memories with photos and the post-adventure blog post. But all of this is especially fun when my microadventure partner is Becky. She fully engages and joins in on my immersive experience, a willing participant in all ways.

After the afternoon play had ended, Becky spent the rest of the afternoon and evening with me, indulging in a delicious Mexican meal and then a walk on Lido Beach, during that most beautiful time – sunset!

Mother Nature is once again gracing us with sunny, warm days which always gives me an extra boost of happy juju. But that was just the icing on the cake. The play, the company, the food, and the beach.. it’s more Becky’s than mine, but I really enjoyed “Our Town” — both the play, and lovely Sarasota.

I’d wanted to blog about this on National Pink Flamingo Day, but I’m afraid I’m a day late. But that’s OK because what it says on that site is to celebrate by putting out of those cheesy lawn ornaments.. but what I’m about to reveal is much better. Flamingo-lovers out there, rejoice, because now you can adopt your own real-live pink flamingo! (Note: A bunch of other animals are available for adoption as well.)

While I was in Sarasota, I really wanted to see the flamingos at Sarasota Jungle Gardens, but, of course, it was closed like everything else because of Covid-19.

However, I found out for a $50 donation, I could adopt my own flamingo!! I help the Gardens, adopt a flamingo, and they take care of it! How cool is that?

Not only are they taking complete care of Kazi, but they sent me a great packet of information about flamingos, a Certificate of Adoption, a flamingo magnet, an 8×10 photo of Kazi and a personal letter, even congratulating me on my “Carpe Diem Day Movement!” (I told them that flamingos were my Carpe Diem Day mascot!)

This is a wonderful opportunity and I can’t wait to visit Kazi when I get back to Sarasota.